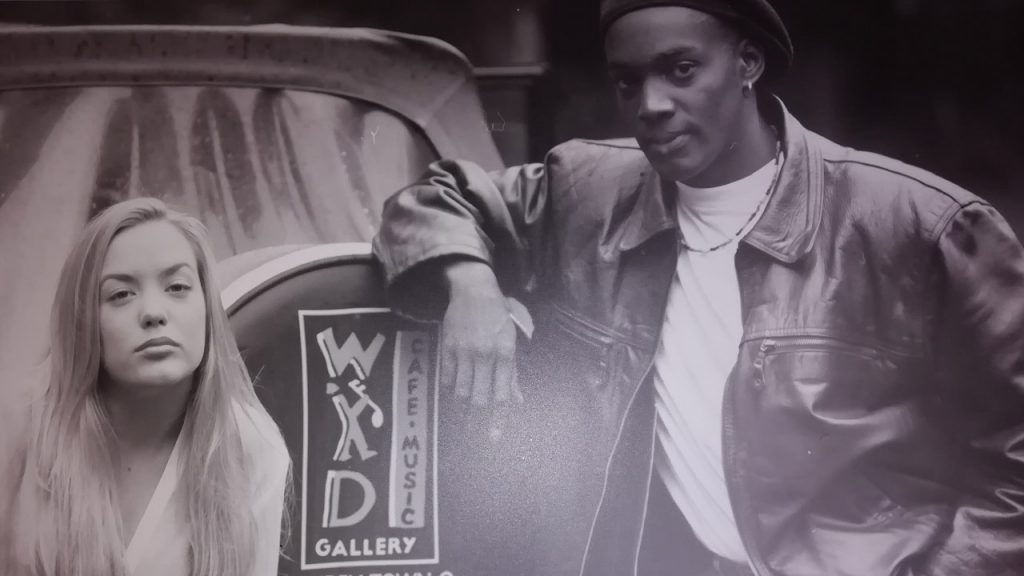 Boogie80: Hi Tony and thanks for accepting this exclusive interview for Boogie80 !

First of all, we’re are so grateful to have finally found a member of the original band End-To-End. We’ve been trying so hard to seek information on the internet with no luck until you came to us through our YouTube channel. Thanks again for reaching out to us!

Boogie80: How was formed End-to-End and what made you guys come to music and choosing the name End-to-End (or N-To-End and En-To-End to) ? What was the role of each member ?

Tony: I lived in a place called Enfield Town, and one of the many clubs I visited was in Southend, where I met a keyboard player who played me some of his tracks. One stood out to me, so I asked him if I could take a copy home, and write some lyrics for it. When I had done so, I took it back to him and asked if he wanted to record it with me. He declined. So I called my old school friend Dave Henriques (Tuccedo), as I knew he could play a piano/keyboards ,and although he was already in a band , he agreed to do so. We ended up recording ‘”Confuzzion”. It was originally going to be sung by a female , but I believe she wanted  £80 . I could not afford that . So I said to Dave . “We will sing it !” . So we did !
En-To-End , was basically named after my original journey =Enfield to Southend . There was only the 2 of us.

Boogie80: As far as we know your very first releases were issued on the indie label TS Records. Who’s behind this label and how did you get the deal ?

Tony : There was no record deal. I paid for this out of my own pocket . My brother Gavin designed the label. I paid for the records to be printed. TS records is just my initials.

Boogie80: According to the company catalog on Discogs we can find releases #1 and then from #3 up to #6. Any idea of catalog release T.S.2 ?

Tony : This may have been a re-mix of “Confuzzion”

Boogie80: We know that you were also part of the London-based band Intrigue (Pressure, Music Power and Project Records). Can you tell us more about it? How did you get in touch with them?

Tony : I was a full time electrician working part time every other Saturday ,(to pay for my record addiction ! ), in a record shop called Music Power. Late one Saturday while the shop was closing, one of the managers walked in with these 3 guys who he introduced as Intrigue . They were a reggae band in their 30’s who were making soul music, and needed a dance routine for future personal appearances (PAs). They asked if I could help them with a few moves. What ?!  Me ?!  A 22 year old Soul Boy! I jumped at the chance. So myself and the manager would work out simple routines, and then practice with the band a couple of days after work. “Let Sleeping Dogs Lie” , and ‘“Like The Way You Do It” , were the tracks .

We travelled up and down Britain, (5 of us in the managers battered old estate car). I do remember we did do lots of PAs. On the way to gigs the band would practice the tracks, I started to join in singing different harmonies, they liked what i sung, so I would do the same when we were on stage. Then, they recorded a track called “No Turning Back” and asked if I could do the same thing, which I did .The only time I went in the studio to record with the band was when the management changed. Mel the keyboard player, played some music he had written, and while listening, I started to write some lyrics, once again . He liked what I was doing, it was different to the songs they had been writing up until then, and they let me take a copy of the tracks home to complete. I wrote lyrics for 2 songs. I called the tracks “Heaven Made” and “Ropes”.

Our new manager had bigger ideas . We travelled in his top of the line Range Rover , and sometimes his big American pink Cadillac . He teamed up with a well known DJ called Steve Walsh , who got us bigger gigs. I do remember sitting and talking for quite a while with the members of Rose Royce in a famous Hammersmith music venue. They were nice.
As well as Rose Royce , I met The Fatback Band, Loose Ends, 5 Star, The Cool Notes, Odyssey and Phyllis Nelson. I have to admit there were many more that I can’t remember, but then Steve Walsh passed away. Our manager, who was an estate agent, got into financial trouble . End of Project records!!! I was working nights on London Underground stations, and so carried on, with what was paying the bills, while the band moved on, but i missed the buzz I got from being in a recording studio. Then I decided to make my own record. So I started saving money for studio time and that was how En -To – End came about.

Boogie80: Later releases came on UK Street soul specialised label Sure Delight. How did you move to this company ?

Tony : Because i wanted to write more songs , I needed more money. So I took Confuzzion to a record distributer called Jet Star Records . Although they dealt mostly with reggae artists , the main man Mr Palmer , liked it , but he wanted a club version , so agreed to pay for me to do a remix . We he distributed through their Sure Delight label.

Boogie80: End To End is a proper band of the late 80’s/early 90’s UK Street soul scene. Can you remember how this kind of music was received by the audience? Were you touring at this time? Did you get heavy rotation on dedicated radio stations back in time ?

Tony : We did not tour, or listen for radio play, because this was only done in my spare time as a hobby. I was an Electrician.

Boogie80:. Did you happen to meet other Street Soul bands back in time such as Soul Connection, Deluxe, Thomas Esterine, Dazzle, Rick Clarke, etc,… ?

Tony : The answer would be no, for the same reason as the last question.

We can notice that most of your releases were issued as white labels/promo records (except for the 7’’ version of “Confuzzion” released in ‘88).  And as a matter of fact none is dated. Can you confirm the year of release for « Money Talks », « We Can Work It Out » and « Go To Get Away » for instance ? “Money Talks” has become an ultimate UK Street Soul anthem for all soul music lovers and a true sought after record for collectors all over the world since its appearance on our YouTube channel. Do you know how many copies were officially pressed back in time ?

Boogie80: When we listen to « Confusion » or « Money Talks » both tracks could be considered as « conscious » music. What led you to this kind of project when most of the records of this time were dealing with love and joy ?

Tony: You said it! most of the records were about love and joy . I wanted to tell what was happening, in the real world, which wasn’t all Love and joy. I was writing about what I was seeing, and personal life.

Boogie80: As we reached the 90’s, soul music was shifting to New Jack Swing and early house influences. « Got To Get Away » features Bryan Chambers lead vocals and he’s credited on the white label. How this collaboration came to reality ?

Tony:  I stopped writing for a couple of years, after my marriage broke down, and I moved to Luton. When I returned to London, i ran a Jazz night at a wine bar called WKD in Camden town . It was at this wine bar where I met Brian Chambers, who agreed to sing the vocals on this track, because I did not consider myself to be a singer. I just wanted to write more songs again.

Boogie80: Tell us now what happened to the band after the release of « You Could Never Change » in the early 90’s ?

Tony: After “You Could Never Change”,  my spare time was dedicated to my daughter. Dave also had a family, so life just went on.

Boogie80: Do you still meet up with David Henriques ? What are your projects today ?

Tony: I met Dave for the first time in 8 years last November, as we were approached for permission to remaster our material (lucky I kept the master tapes! ), and because of people like yourselves , I am now working on re-releasing some of our old songs.

Boogie80: Are you still collecting records ?

Tony: I stopped collecting records around 1999 I think, as CDs were starting to take over . Even though i had to sell a few over the years . I still have a small collection of around 3 to 4000.

Tony: I have too much of a varied taste to answer this correctly. Biggie Smalls , Freddie Hubbard . Steely Dan , Barry White , Tania Maria , Teena Marie , Slim Shady, Loose Ends ,J Dilla but because I have more tracks of his than anyone else, and he was the first person i saw play live , ( ‘The Royalty ‘, in Southgate , North London ) , way back when!!!. My favourite Artist is Roy Ayers.

A reissue of “Money Talks” is coming soon on Backatcharecords