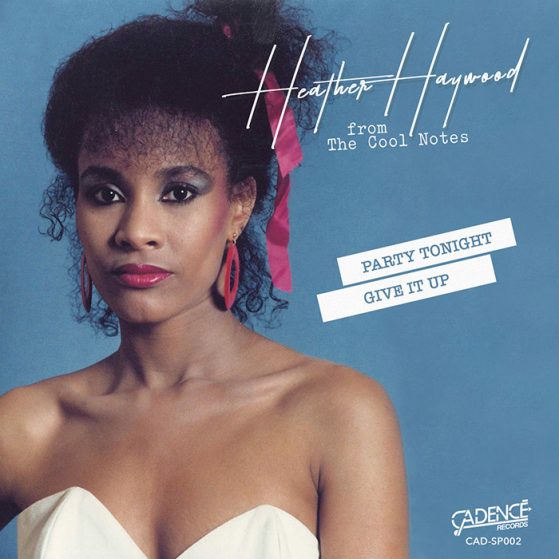 Party Tonight / Give It Up

Party Tonight / Give It Up

Rarity: Not so common

Brit singer Heather Haywood is back on track with this limited edition 7 inch single. For this release, Heather teamed up with talented French producer Nickee B (previously released on Cadencé Records) who wrote and produced both songs.

Heather enjoys a strong reputation in the Brit Soul scene, she was one of the two lead singers (along with Lauraine McIntosh) of the famous South London Soul music band, The Cool Notes.
She was the voice behind the band biggest hit single «Spend The Night» that peaked at No.11 in the UK charts in 1985.
The uplifting «Party Tonight» with its high-pitch synth sounds will throw you back to 1984!

Whatever you’re in the mood for, shakin’ your body to the floor or riding the city night in your Pontiac Trans AM, this song will do just right!

The flip side «Give It Up» is more «serious sounding» in comparison with Side A but remains frightfully effective on a dancefloor! This tune might remind you the 80’s sound of Recording labels such as Prelude or Sam Records.

This record became a classic Modern Funk, Boogie 7″inch sold out it 8 days !

Available now on:
Back