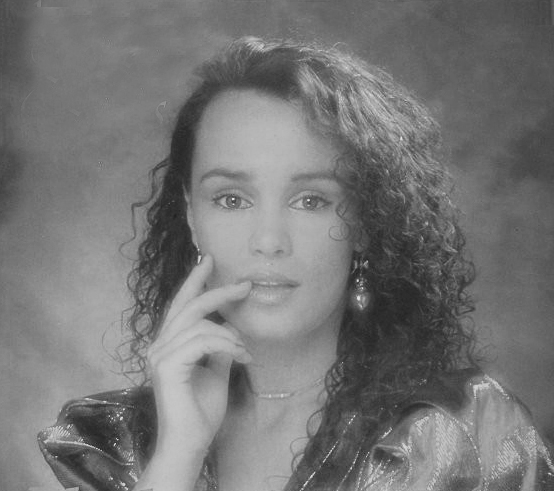 We managed to get in touch with Isabel Roberts. Those of you who are familiar with 80’s British Funk, will probably know Isabel for her stunning dancefloor classic “Rhythm Of Your Love” released on small label Hot Vinyl in 1986.

Boogie80: Isabel. First of all I would like to thank you for accepting to run this interview. Could you introduce yourself to those who don’t know you yet ? Let us know more about your career and your involvement in the 80′s Brit Funk scene.

Isabel: I am from a Caribbean background mixed with Irish so music on both sides. My folks are from Trinidad whose music is primarily melodic soca and calypso so I grew up listening to that music in the home. My father was a great fan of Dionne Warwick and Otis Reading so classic soul was very much a part of what I heard played in the house as a child. In later years I was hugely influenced by the Jackson 5 growing up and the underground sounds of soul which nowadays they consider mainstream. Main artistes I admire are Tina Marie, Luther van Dross, Prince, Al Jarreau and Chaka Khan to name a few. I love jazz funk the original American outfits like Leroy Hutson, War and Cameo so literally my musical appreciation is right across the board. When we recorded Rhythm of Your Love in the mid eighties we went for the 80s production but with the melody and musicianship of the early funk masters that came before.

Boogie 80: How did you get your first soul record deal with Hot Vinyl which is known to specialise in reggae, ska and lovers rock music ?

Isabel: I initially started singing as a lovers rock singer with various producers and released a few lovers rock covers on white label (Cover of Hello Stranger by Carrie Lucas) to name one. Being Trinidadian I knew Smokey Joe DJ the owner of the then Hot Vinyl label. He was very good friends also with Steve Slavin who wrote Rhythm of Your love and other follow up tracks and basically Smokey wanted to have a soul artiste to enter in to the then dance mainstream.

Boogie80: “Rhythm of Your Love” is definitely a club classic. Do you remember if it charted back in time in the UK and in Europe ?

Yes the track reached 45 in the national charts in the UK and was at the time the only dance track amongst all the American releases at the time (namely Saturday Love Cherelle and Alexander O ‘Neal)….It reached worldwide distribution and did very well in Europe generally high on all the Soul Dance Charts.

Boogie80: 2nd Release is known to be the mid tempo duet with Robert Chandler “Love Situation” on the same label and by the same producer Steve Slavin. How did you meet each other ?

Isabel: Steve Slavin writer and producer is actually a family connection and has been in the business for some time; when he wrote these tracks he immediately wanted me to be the voice of his music. “Love Situation”  was an English take on the Saturday Love track by Cherelle and Alexander Oneil and Robert Chandler was some one I knew who was just starting out at the time in the music industry. This track was really well received by the local pirate underground stations in the UK at the time and seen as a great party tune.

Theres a 3rd track recorded with Steve Slavin “I just Fall in Love”. This record is not dated When Exactly was this record released. Did this up tempo song come out before or after the other releases: “I Just fall in Love” stands as a collectors item among hardcore collectors. Do you know how many copies were initially issued:

“I Just Fall in Love” is the 3rd song recorded and released by Hot Vinyl label and a very small amount of copies were produced for distribution. Unfortunately Hot Vinyl as a label folded at this time and I suppose the reason “I Just Fall in Love” is so rare is there are some couple 1000 copies around which were directly distributed from Smokey Joe the DJ at his record shop in Hackney UK. Fall in Love is a real favourite of the three recordings for me as I felt with a little bit more push and marketing and finance this could have been a chart hit at that time.

Boogie80: In the 80s the UK Soul Funk scene was huge with Loose Ends Junior Second Image etc. What is your vision of the brit funk scene at the time. Did you ever meet or collaborate with other UK artists ?

Isabel: Yep the Brit Funk scene as its called came up to fill our charts when the Americans kind of lost their way and went down the rap route. We still wanted to hear good melodic funky good music . I worked at this time with David Grant and also Georgie B and Second Image and Total Contrast were another outfit recording featured vocals on their albums and releases. Right now 2013 is a resurgence of the Brit Funk appreciation with shows for artists all over UK from that era so the music has sustained. I am always asked to PA “Rhythm of Your Love” and the other songs I have released at tribute concerts and shows.

Boogie80: Do you have any current or future musical projects or planning to release new tracks or albums ?

Isabel: Yep I released a pure Jazz Album in 1991 which was really acclaimed as original and did well as Jazz Is something I am very fond of performing. I worked also in the late 90s with Ronny Jordan from UK Jazz Soul Fusion artist  and featured as vocalist on his album The Antidote on Island Records with Guru on quite a few tracks. A release dance cover of So What (Miles Davis track) was covered by Ronny and reached number 10 in the UK charts at the time. I had the privilege of working with Ronny Gordon ( ten string bass player in Gill Scott Herons bands over the years) and collaborated on his own releases as well as having worked with the late Gill Scott Heron at the Jazz Café and UK last tour in London. I am writing and producing my own dance tracks currently as part of my own band SOUL INTENTION and again working with Steve Slavin on a possible remix of 3Rhythm of Your Love3 as so many people ask us to re release it. You never know it may chart bigger this time.

Please tell all my fans and people who appreciate my tracks that I thank them for their ongoing support. Love to come out there some time and PA the tracks to the die hard fans.